YOUR CAMPSITE NEAR THE NANTES TO BREST CANAL

Near the campsite, discover the Nantes-Brest canal, built during the Napoleonic era. This grandiose canal is considered to be the greatest technical work of the 19th century! Today it is a real haven of peace where nature has remained king. The itinerary follows about 320 km of towpaths, out of the 400 km of the Canal de Nantes.

The Canal is enjoying a new lease of life thanks to itinerant tourism, whether on foot or by bicycle. It remains a quiet place to organise outings in the middle of nature. The towns and villages that it passes through or near offer a rich heritage. It is punctuated by flowering locks and barges, so following the Nantes Canal is a unique experience.

Calm and serenity punctuate your stroll along this waterway. The small Breton towns of Malestroit, Josselin, Rohan and Redon are also a must. 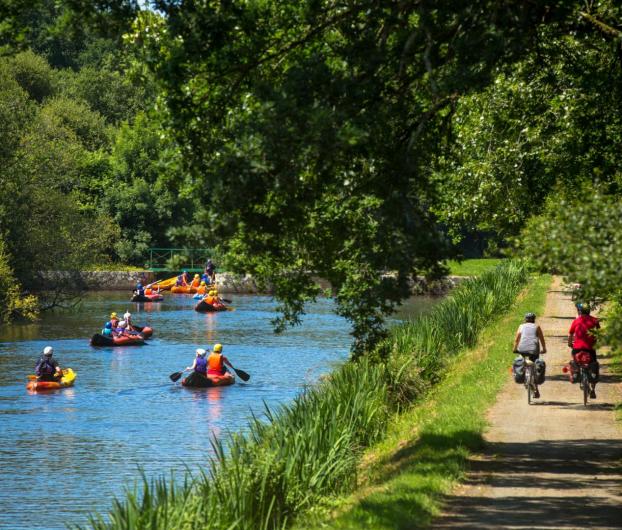 Organise your weekend near the Canal de Nantes à Brest

Organise your walk from Châteaulin, on the towpath of the Canal, along the river Aulnes. Discover a picturesque route, ideal for a weekend of fishing or walking with friends. It is also the perfect place for a family bike ride and to discover the lock houses.

If you are looking for accommodation near the Canal de Nantes à Brest, Camping Au Gré des Vents is the right place for you! Located 10 km from the canal, you can enjoy our accommodation and pitches for a well-deserved break in the heart of nature.

Thank you for this season by your side !

It is already time for us to close our doors until our reopening on Friday April 08, 2022.

Until then, we wish you pleasant moments and will obviously keep you informed of our developments this winter to always better welcome you! #stayconnected